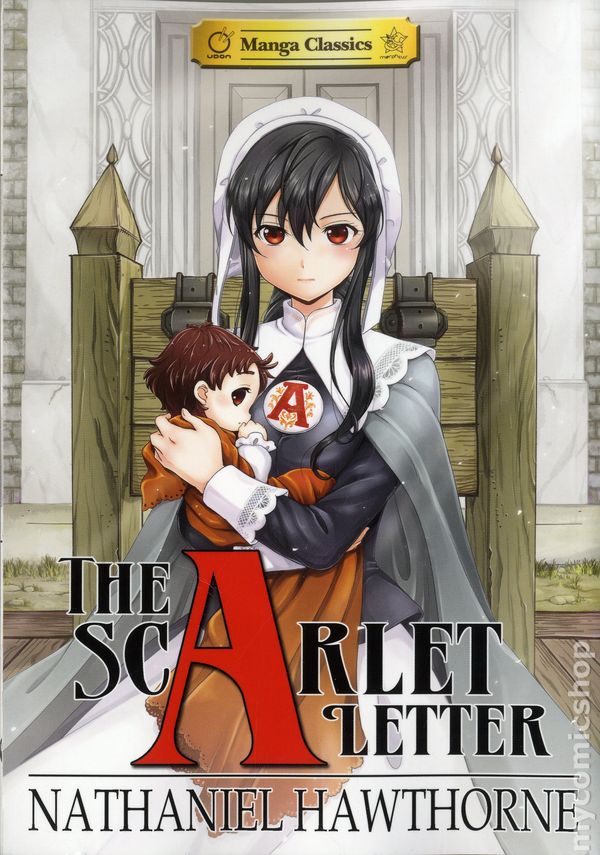 The first thing that caught my eye about this ARC was that I had to read last page to first page! Yes you read that right. Manga follows the custom of being read from right to left, so what may appear to us as the last page in fact is the first page.

With that being said, the portrayal of the characters was convincing. Arthur Dimmesdale is shown characteristically with an air of melancholy about him and his speeches brimmed with pathos. Furthermore, Rev. Dimmesdale kept clutching his robes where it had closest proximity to his heart. This characterized him rightfully to show that something was amiss and troubling his heart.

Dr. Chillingworth on the other hand was shown with shrewd-narrow eyes and a snake aura. In Christian symbolism I believe snakes denote Satan himself. The manga artist’s choice of rendition seems to indicate that Chillingworth had succumbed to his darker side in his path of vengeance.

Hester Prynn is shown as a beautiful and determined woman. The scarlet letter or “A” that she wears owing to her adultery… soon symbolizes her “ableness” as a seamstress, and later on after she assists her fellow townsfolk the A transforms into “Angelic” as testified by Arthur Dimmesdale himself. Her decision to settle at the edge of town can possibly indicate that while she wants nothing to do with society, she doesn’t want to forsake it altogether as well.

Then there’s Pearl, with her wild nature, and elfish appearance. In the original Pearl had elements of magic  in her, which was an anti-thesis to the cold hard and rigid life that the puritans had come to lead.

As for the Puritan townsfolk, they appeared to be a bigoted group of reactionaries who treated sin like it was the last vestiges of bubonic plague. Their biggest failing was that they did not use the context to pass judgement but instead generalized their dealings with sinners. In Hester’s case, she had been married off to a scholar old enough to be her grandfather and someone who was said to have died at sea with no one reporting him to be alive for 2 years. If she fell in love with someone else during that time then that is not in itself a sin.

The manga’s version just like the original novel questions whether or not Hester was the true sinner or of it was Dr. Roger Chillingworth for failing to understand the circumstances that led to Hester’s folly and forgiving her, and if Rev. Arthur Dimmesdale was to blame for letting Hester Prynne take all of the blame and be a bulls eye for social stigma for several years.

Keeping all of this in mind, the manga takes a classic and turns it into a format which can be picked up and finished in a matter of hours (1 hr 15 mins in my case)  and it does this without losing the sophistication of the original. I hope to see more from the manga classics series in due time and process.